Context: Read this as I worked for EC language school in central Cambridge.

The second installment in Mantel’s chronicle of the life of Thomas Cromwell is as good, if not better, than the first. This trilogy is turning out to be a classic piece of historical fiction, the likes of which I’ve not read before.

It’s not just that the subject matter is excellent, with a panoply of stupendous characters who are captivating and complex in their own right. No. It’s that Mantel has created a style of fiction to suit them and their political intrigues down to the very vocabulary she uses. It’s one seamless package.

The novel picks up where the first in the trilogy leaves off. Wolf Hall brought us through the protracted process of having Henry’s first marriage to Katherine annulled and ushering in the short reign of Anne Boleyn. Bodies focusses on the period of Anne’s demise, one which also saw the death of Katherine.

Having also just finished Alison Weir’s Henry VIII: King and Court (which I shall review shortly), I had some historical insight into the events that Mantel embellishes with her intimate portrait of the involvement of Thomas Cromwell. It is highly likely that Cromwell was nothing less than Boleyn’s murderer despite never having raised a word against her.

As the Queen turned out to be less than useful to Henry (i.e. unable to bear a male heir), Cromwell seems to have seized on the opportunity for political gain. In this, he not only reinforced his royal reputation as a man who gets things done, he also rid himself of a number of rivals by implicating them in a plot of infidelity that saw heads roll at Tyburn, including Anne’s.

The steady scheming and ruthless plotting of Cromwell is carried out with masterful political precision. Mantel has created a character you both detest and admire. I’ve a feeling that, come book three, we might even find ourselves feeling sorry for this Machiavellian monster. This is great writing. It shows us how human we all are. How, dealt the same hand of cards, we might well have done a lot worse than Cromwell did with his lot.

So, I eagerly await what I very much hope will be a third Booker winner and the culmination of a trilogy that hasn’t gripped me so much since… well, since Lord of the Rings I don’t think.

MAP
Check out the locations mentioned in the book with Arukiyomi’s Google Earth Map of Bring Up The Bodies. 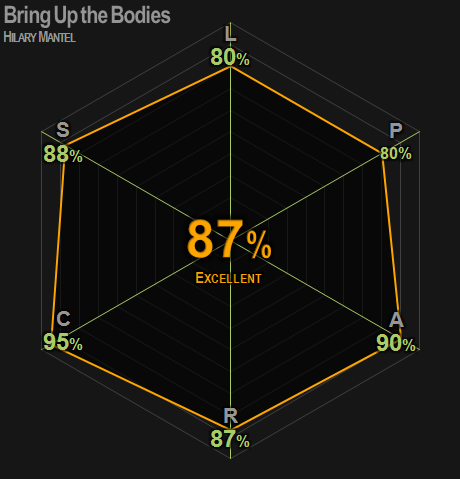 Next post: 0414 | A Season in Mecca: Narrative of a Pilgrimage | Abdellah Hammoudi