0410 | The House of the Seven Gables | Nathaniel Hawthorne Context: Listened to this from Librivox as I commuted back and forth to Cambridge teaching English there.

Only read The Scarlet Letter by Hawthorne before and I enjoyed that. This though, was another story. It started well enough with a Poe-like sense of mystery and doom foretold. But then it tailed off into meandering prose and finished fairly predictably.

Hawthorne is not my favourite writer, I have to say. I found it pretty hard to keep track of what was going on. Okay, I was listening to the audio book and your attention can drift when you do that, but if the book is a good one (as Scarlet was), the audio can hold your attention (as Scarlet did).

The opening passages made me think I was in for a tale of suspense. But when things settled down, I quickly lost interest. None of the characters really grabbed me and, although I knew that the inevitable curse was bound to come to pass, I couldn’t really be bothered either way by the time I’d got halfway through.

With Scarlet, I could understand very clearly what Hawthorne was trying to communicate. The characters were also very strong and memorable. But House is nothing like this. I wonder which my next Hawthorne will most closely resemble.

Phoebe, after getting well acquainted with the old hen, was sometimes permitted to take the chicken in her hand, which was quite capable of grasping its cubic inch or two of body. While she curiously examined its hereditary marks,—the peculiar speckle of its plumage, the funny tuft on its head, and a knob on each of its legs,—the little biped, as she insisted, kept giving her a sagacious wink. The daguerreotypist once whispered her that these marks betokened the oddities of the Pyncheon family, and that the chicken itself was a symbol of the life of the old house, embodying its interpretation, likewise, although an unintelligible one, as such clews generally are. It was a feathered riddle; a mystery hatched out of an egg, and just as mysterious as if the egg had been addle!

And wise Uncle Venner, passing slowly from the ruinous porch, seemed to hear a strain of music, and fancied that sweet Alice Pyncheon—after witnessing these deeds, this bygone woe and this present happiness, of her kindred mortals—had given one farewell touch of a spirit’s joy upon her harpsichord, as she floated heavenward from the House of the Seven Gables! 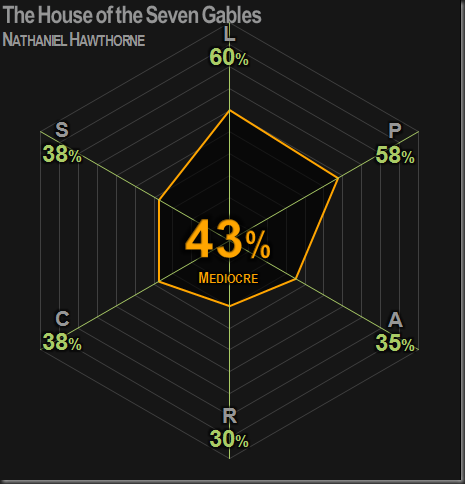 Key: Legacy | Plot / toPic | Characterisation / faCts | Readability | Achievement | Style Read more about how I come up with my ratings.