0409 | Behind the Beautiful Forevers | Katherine Boo Context: One of many books I’ve enjoyed finishing off as I became a Cambridge commuter on the bus.

Saw this reviewed in The Guardian and as it reminded me of Lapierre’s City of Joy kind of mixed in with A Fine Balance, I thought I couldn’t go wrong with it. It’s an account of the lives of various characters and families in one of Mumbai’s largest slums. Despite it being a good read, there was something not quite right about it.

Take those two books I’ve already mentioned. They are both excellent insights into the situation of the poor in India. City of Joy is loose reportage. Lapierre makes this clear. He’s writing a novel inspired by characters and situations he has experience of. Mistry’s Balance is a full-blown novel allowing you to grasp the plight of the poor under Indira Ghandi. Both are very moving and you find yourself lost in the writing, deeply immersed in the worlds the writers describe. I know to a certain extent that they’re effective books because I lived and worked in central Kolkata when I was 18 and that included stints in slums and Mother Theresa’s Home for the Destitute and Dying.

But Boo isn’t as good a writer as either Mistry or Lapierre. As a result, I was confused for a large part of her book. I kept having to go back and check that I was reading non-fiction because the book had too much of the realist novel in it for me. This weakened the impact of what would otherwise have been shockingly bad situations that these characters were involved in. Because of the tendency to fictionalise the real, I didn’t take the events as seriously as I might have.

And despite her descriptiveness, there was something flat about the whole thing. It just didn’t come to life and suck me in at any point. It wasn’t a hard read but it’s going to be one of those books that I’ll have forgotten I’ve read. In contrast, I’ll never forget I read City of Joy or A Fine Balance.

And, when I’d finished it, I was really unclear just what she expects me to do with the knowledge I now have of the poor of Mumbai. Reportage is usually written to motivate, but because this strayed from the genre I expected, I was sure how to respond. I’m not saying it was a bad book; the situations she describes are, for the most part, horrific and should be more widely known. Boo’s book contributes to that knowledge, but I’m not convinced it does more than that.

In the West, and among some in the Indian elite, this word corruption, had purely negative connotations; it was seen as blocking India’s modern, global ambitions. But for the poor of a country where corruption thieved a great deal of opportunity, corruption was one of the genuine opportunities that remained.

But for now, eleven cans, seven empty water bottles and a wad of aluminum foil rested on a long spit of concrete, awaiting the first child with the courage to claim them. 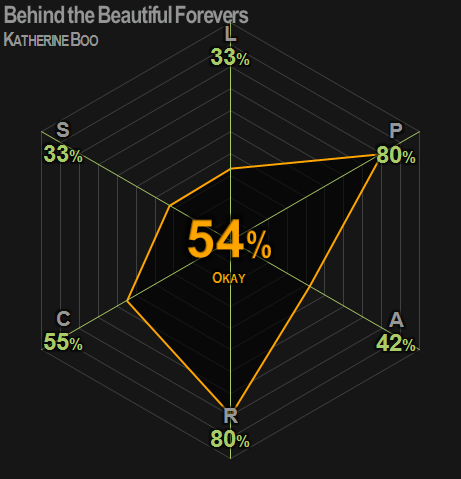 Next post: 0410 | The House of the Seven Gables | Nathaniel Hawthorne