Context: Started this ages ago when we were in Australia and enjoying baths with views like this!

I’m not getting on too well with Iris Murdoch. Under the Net went pretty much over my head. The Bell was a good read. And this one falls somewhere in between. It had moments when I was glad I was reading it. Whole chapters even. But, on the whole, I found myself labouring through it and counting how many pages I had to go.

It begins well enough. I thought we were going to plunge right into a murder-mystery within the halls of a government department. But soon were were at some house in the country with what seemed like a commune of characters I couldn’t keep track of. There are various love triangles and not a few sex triangles. In fact, it seems she had a hard time keeping any of her characters out of bed at all.

The novel jumped around a bit too much for my liking. I wasn’t sure until about halfway through who I was really supposed to be focussing on. And, apart from a rather well-written piece involving a cave at high tide, I wasn’t really captivated at any point.

This was nominated for the Booker Prize so that got me thinking as to why. Usually, Booker Prize winners have deeply drawn characters who suffer a variety of inner and outer conflicts. And, so it proves: Ducane is just such a character. You feel his conflict as he leads a double life for most of the novel. The others though didn’t really move from 2D to 3D for me.

All in all, this is not one of her best I don’t think. Read The Bell instead. 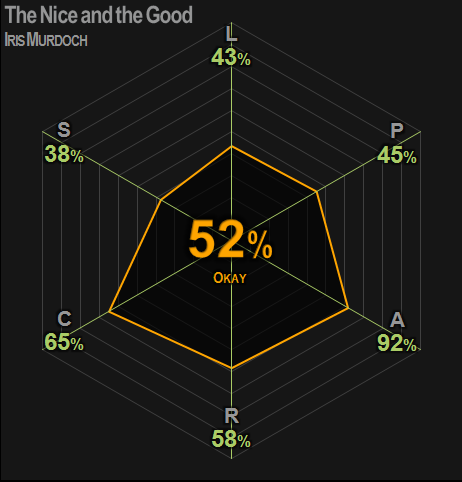