Nice to finish off the year as I began it with a book I’m happy to rate as ‘excellent’.

This is a remarkable book for so many reasons. Firstly, it’s the story of WW1 from the German point of view. There aren’t many of those. Secondly, Jünger enlisted right at the start of the war and saw it through to its conclusion. This means it’s a record of the entire campaign. Finally, it’s just extremely well written.

Jünger begins as a private and ends as one of the highest decorated survivors. Injured no less than 14 times, he developed a remarkable capacity for leadership. This and his ability to survive in the most extreme conditions must surely have inspired the thousands of men he fought alongside and watched fall.

One of the major strengths of the book is that it is told very matter of factly. Wars of this nature need no embellishment. Pure description of the torrid affair is enough to move us. Do not come to this expecting Pierre’s account of the Battle of Austerlitz in War and Peace. Nor the poetic prose of O’Brien’s The Things they Carried. This is description pure and simple and the more powerful for it.

The fact that Jünger survived two world wars is in itself amazing enough. I was astonished though to discover that he actually lived to be 102, something that most of us find impossible even in peacetime, downhill and with the wind behind us. Time and time again, he describes near misses and coincidences which prevent his demise:

In the evening, as I gave out the password, a large shell fragment came buzzing into my stomach. Fortunately, it was almost spent, and so merely struck my belt buckle hard and fell to the ground.

I knew from the increasing noise that the arc of the next projectile was heading almost exactly for me. An instant later, there was a heavy crash at my feet, and soft scraps of clay flipped into the air. It was a dud!

He describes situations where, but for chance circumstance, he would have met his doom: the subordinate who stopped him to ask a question while he was walking back to get a wound dressed delayed him reaching a crossroads which is hit while they were in conversation; hearing incoming shells, he leaves a farmhouse to find shelter and chooses a shed because its raining. Later, when he repeats the exercise, its not raining so he stays outside. The shed takes a direct hit.

And through it all, I could not help but be impressed by the sheer determination to survive and to make the most of horrendous situations. Yes, many awful things were done by all sides in this war. But I needed a reminder that some truly great things were also done. As Jünger himself says

In war you learn your lessons, and they stay learned, but the tuition fees are high.

This book has us benefitting from his expense. 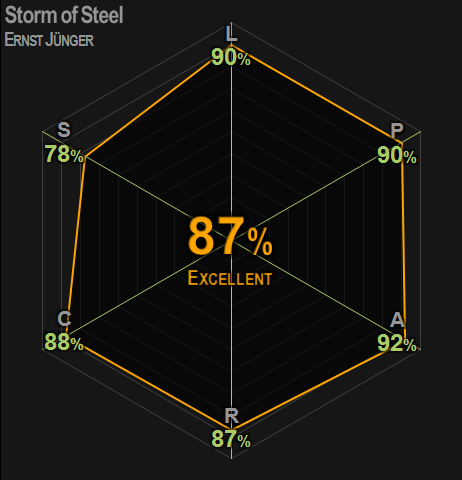 Context: Broke the back of this one whilst outside in the garden reading on some deceptively comfortable garden furniture. REVIEW Philip Roth’s Pulitzer prize-winning novel American Pastoral didn’t really do…

Lem’s account of a planet covered by what seems to be an intelligent ocean is the work not just of immense imagination but also a critically insightful mind. Kris Kelvin…

Context: Was reading this when I visited PNG’s only shopping centre in Port Moresby. Saw a Huli warrior in the supemarket in full regalia! REVIEW Took me a long while…

Pierre’s adventure tale of the pursuit of poor little Vern by virtually the entire machine of ‘Merica is a combustive mix of satire and suspense. The pace doesn’t let up….

I’ve never been inspired by novels written either by South American authors or set in South America. However, Esquivel is Mexican, and as that’s very definitely part of North America, she didn’t fall…