Another Naipaul down. Not as good as In a Free State which I read earlier this year and which I thought was excellent, but nevertheless a hard-hitting, thought-provoking exploration of the impact of the colonial legacy.

The focus is Salim and the entire book is narrated by him. Starting on the east coast of an (unnamed) East African nation, he migrates inland to a town on the eponymous bend in the river to take over a small shop. From the vantage point of this interior settlement, Salim describes his experiences there, the cast of characters and their various fates as the inevitable post-colonial political pall is cast across the nation.

I found Salim really two-dimensional and felt extremely claustrophobic throughout the novel. He seemed really inaccessible to me. He spends almost all his time interpreting and commenting on the characters about him but never really considers his impact on them. For example, there’s a woman he gets involved with and all he can think about is what the affair means to him. He doesn’t seem to give a second thought to what it means to her. I wanted to give him a good slapping on more than one occasion.

And the tension that builds takes forever. I read a 223 page edition and things didn’t really come to a head until the late 190s. Pretty much like life in many isolated towns (not just African ones) not much of note happens except that people go around trying to block out the incredible boredom that sets in from nothing much of note happening. It took me ages to read because of that because it just didn’t motivate me.

Perhaps that’s what the novel is really about. Perhaps Naipaul was trying to say that while the mundane life of millions went on, plots were hatched in far away capitals which would eventually make people long for the mundane. If so, then the novel certainly conveys that.

Salim eventually finds his destiny catching up with him, but by then, I wasn’t really bothered what happened to him. This book, like all of Naipual’s, are essential reads for those who are interested in the complex issues that the post-colonial world struggles with and, for that reason, is still relevant today. But Bend isn’t his most captivating rendition of that theme.

The searchlight, while it was on, had shown thousands, white in the white light. 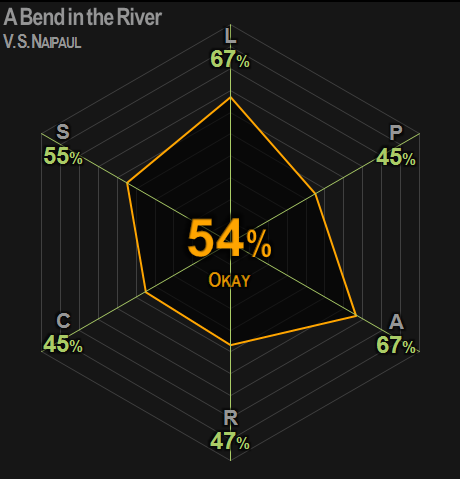