This is not a relaxing read. This is not a book to take lightly. From the cover (let alone the first page!) Phillips has you in an armlock and tries her best to wrestle you to the floor. I came out bruised, battered and I think she might have edged the bout on a referee’s decision.

If you live in the UK, particularly if you live in an area with a sizeable Muslim population as I have done, many of the points Phillips makes in this book will not be new to you. In fact, they might well affirm how you’ve been feeling. They might even give voice to opinions you’ve felt too intimidated to share with anyone.

It’s obvious to anyone who is a reader of the signs of the times that Britain has become a victim of its own political correctness. This book gives you example after example of how the legislature has tied itself in knots as it worships the god Diversity and celebrates the beliefs of anyone who happens to be in a minority. Thus, it has spent the last 20 years appeasing the Muslim community in particular.

Why in particular? Well world events and those within its own boundaries have meant that the UK has had to face people living out the teachings of the Koran in a more direct way than at any other time in history. And, Phillips argues, they are having the wool pulled over their eyes by the Islamic architects of a plan that, ultimately, has the Islamicisation of the world as its end goal. I agree with this. In fact, I would challenge any Muslim who did not agree that they were not taking their faith and the Koran seriously. I’ve read the Koran and that is the clear agenda.

It would take a lot of work to refute the argument Phillips presents. I’m not saying that this is because its watertight. Rather, her argument is long, detailed and, for the most part, well-researched. I can’t imagine anyone from the Muslim community, for example, writing as scholarly a document in rebuttal. I’m not saying they’re incapable. I’m saying that, from my experience, I can’t imagine it.

There are however, areas of weakness. For example, late in the book, while presenting evidence of a scholar’s views which argue for nothing less than the eradication of Israel as a nation state, she says

despite saying he supported Israel’s existence, he appeared to be suggesting that the Jewish state should be singled out for a fate imposed on no other democracy properly constituted under international law.

Nothing wrong with this. Except that earlier in the book, she says that the British judiciary has lost its spine and given itself over to the rule of international law which, she argues, is undemocratic and therefore a fantasy. You can’t have it both ways. Either international law is binding or it isn’t. If it is, Israel has a lawful right to exist as a nation. But if it is, the British judiciary would do well to work under its influence.

Phillips spends a lot of time also haranguing the Church of England for sticking its head in the sand. I agreed with much of what she said. But, in criticising Archbishop Carey for apologising “for bringing Christianity to the world” in a culturally insensitive way during the reign of Empire, she attacks him with

The fact that Christianity had brought civilisation to these remote parts, for the very good reason that it was superior to traditional practices there was not acknowledged.

Right there, I could tell that she has no experience of living overseas with those who make up the church in those “remote parts.” I have a great deal of experience of this and I can tell you right now that “civilisation” was well and truly in place before the message of Christ ever arrived. Of course what Christ taught is superior to any worldly culture if you believe that he is God. But those who actually work, live and love in those overseas communities can tell you that there has always been much in them that reflects Christ’s teachings, as with all cultures, because they are made up of people made in the image of God. It’s a shame to hear such moralising twaddle from someone who is considered to be so scholarly.

I think Phillips has an important message to proclaim. But her style can be described only as rabid and this will put a lot of readers off. More off putting, and a major stumbling block to me, is that after finishing the book, a book which challenges the predominant view that Israel is the baddie in the Palestinian situation, I discovered that she is Jewish.

Now, as someone who has a lot of experience writing social research, not declaring a vested interest is tantamount to rendering your entire paper invalid. It is a major omission that nowhere in this book (as far as I remember) did she tell me where she was coming from. It may be, as my dad argued, that everyone knows she’s Jewish. But I’d never heard of her and I didn’t know. At least now I understand one of the major driving factors behind her writing the book in the first place and why she seemed pretty angry all the way through it. 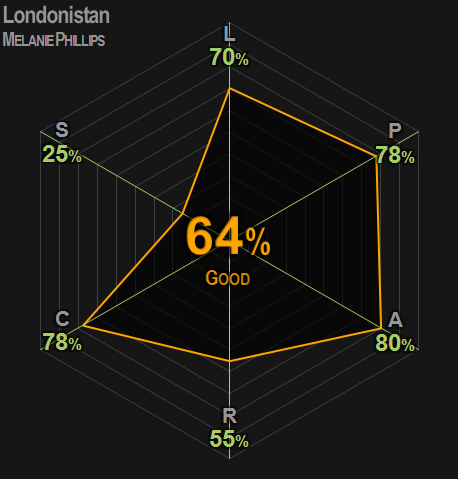 Context: Read large parts of this while doing a loooong backup on my laptop. REVIEW Now this is an interesting book. It’s interesting because, as far as I know, it’s…

Context: We got and started opening a chocolate advent calendar while I was finishing this off. REVIEW This is one of the strangest books I’ve read in a long time….

Absolutely awful, long-winded and over-elaborate. The novel doesn’t deserve a lengthier review than that. Evelina was bad enough, but Burney has yet another novel,  Camilla, on the 1001 list. If…