It was radical at the time. It isn’t now. Now we can hardly stop public figures from stripping naked before us with autobiographies that are designed to shock and titillate. But when Rousseau wrote this he was doing something that hadn’t been done before: writing the truth about his youth.

This book’s one of those “important” books that anyone serious about literature can bore the backside off a bus with, one of those that makes you think the publishers of the 1001 series should have changed their “Must” to “Should.”

So, I didn’t really enjoy this a great deal but I did appreciate what he was trying to do. I was disappointed to read that it wasn’t published until after he’d died. That kind of defeats the object of a confession to me, particularly for those like the falsely accused servant girl who undoubtedly suffered for his own theft and wasn’t socially positioned to profit from selling the story as Rousseau did. Vive la Revolution! 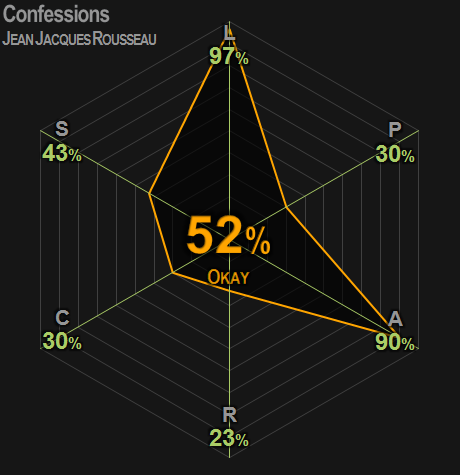 Context: Finished this off as we were heading back in my sister’s car from another day out over the Easter holidays with her family who came to stay. REVIEW I’d…

Supposedly Conrad’s most complex novel, I will admit only that it is his most boring. I seem to have a jinx when it comes to not only reading Latin American…