Being Russian, this is not an easy read and laced with political musings on the collective human condition. But it’s an extremely important book for many reasons, and for that reason worth reading.

As far as I know, it’s one of the only novels that documents both before and after the 1905 Russian revolution. Its intimate description of the impact on both sides of the political divide is very powerful. The young doctor and his family are thrown into turmoil and poverty by the events that unfold. Meanwhile others, such as the enigmatic Petya and self-concerned Komarovsky, thrive in very different ways. This latter character reminded me of a leech, and I was fascinated to discover that his name in fact means mosquito!

On top of that, its open criticisms of the new era make the book a fascinating first example of a genre that would make Solzhenitsyn’s name. Check out some of the quotes below to see how outspoken Pasternak was. I think he was lucky to survive personally. But such writing cost him both the reception of the Nobel prize and his own freedom within the country he loved. The novel was only published in Italian to start with after being smuggled out of the country after it was banned by the state.

The love story you might be familiar with from David Lean’s fabulous film version actually plays second fiddle to the political struggle for Zhivago to be the liberated poet he yearns to be. It’s no wonder Lean focussed more on the torturous love triangle that the romantic doctor finds himself trapped in. It certainly makes for better cinema. In fact, the film is profound for focussing on the emotional struggles we encounter while the novel is profound for the political. Both are ideologies which we all have to grapple with and allow to tame us as we mature.

On the whole, I think this book is a fantastic example of how a novel can be a profoundly influential political document. This is a very powerful art form we are encountering here and a good example of how understanding the historical background for a novel can make it a much better read. 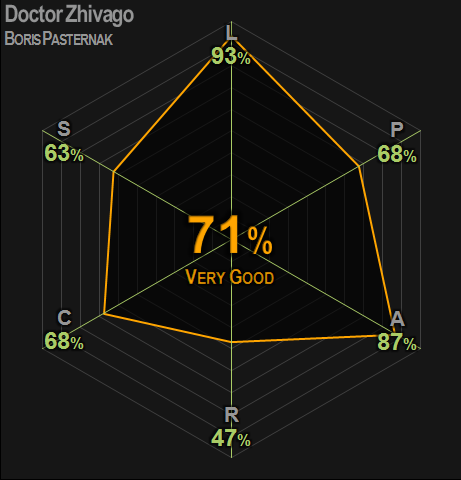 Context: Started reading this as we browsed charity shops in Cambridge. By the next day I’d finished it and had some more books to add to my groaning shelves. REVIEW…

A lot more readable than The Great Gatsby which I read many years before Arukiyomi was born, this was a decent enough novel. I found that as long as I…

Perhaps the most forgettable, for me, of the four volumes so far.Having nearly completed two more memorable volumes since finishing this one off, I had to go back to the…