I thought this was going to be hard going and a difficult read. I was wrong. The story fairly tripped along… well, swung through the trees. Now I can say I know the real legend of Greystoke! But I as.lso know how contrived the storyline really is.

So, in a way I won’t divulge, Lord and Lady Greystoke find themselves young and inexperienced and helplessly marooned on the coast of western Africa somewhere. Not only that but she’s pregnant. Ever the optimist, Lord G sets out to build them somewhere ‘civilised’ to live in.

This was my first brush with the constant theme of “savagery.” By the time I got to the end of the book, I was very fed up with it. Burroughs does not miss one opportunity to remind you how adept westerners are while at the same time relegating any African humans to something only slightly more advanced than the intermediate form of apes that end up raising Tarzan. None of the Africans who feature in the story have a name, for example and while Greystoke deals with his plight with dignity and reserve, the Africans are depicted as jibberingly insecure with all that befalls them. And Tarzan is only as amazing as he is because, let’s face it, he’s white. Sigh.

You only need to spend a week in one of the many villages in Papua New Guinea that I’ve visited to know just how useless us “whiteskins” are in the rainforest. We are hopeless. There is no way on earth that Lord Greystoke would have been able to construct the dwelling he did for himself and his goodly Lady. Not a chance. I know because I myself have had to build a shelter out of bush materials with nothing more than a bush knife.

But, putting that aside, the story is pretty much a page-turner at this point. And it keeps on going this way until I encountered my second brush with Burrough’s limited grasp of reality. As a sociolinguist with quite a bit of experience of what it takes to become literate in any language, let alone one that you know nothing about, it beggars belief that Tarzan can teach himself to read English. This is, quite simply, impossible. Don’t get me started on why.

But, putting that aside, the story kept me hooked. Tarzan grows up and then finally meets up with other humans. This is pretty interesting too. Then I come slap bang into another reality check: Tarzan learns to speak French in two weeks. In two weeks a man who has never heard a word of human speech becomes fluent. Yeesh! Again, this has proved to be impossible.

But, putting that aside, the story then moves on to Europe and finally the US before an ending that I truly did not expect actually. In fact, I was very glad it ended the way it did because, by this point, I was expecting something much more contrived. It almost made me think the ending was someone else’s idea.

There’s no doubt that Burroughs can write a yarn. And there’s no doubt that he came up with a classic here which has inspired countless spin-offs. But if you’re someone who likes your writers to  know their stuff, you might find this a frustrating read. If you can put reality aside and just go with the flow, you should enjoy this.

I never knew who my father was. 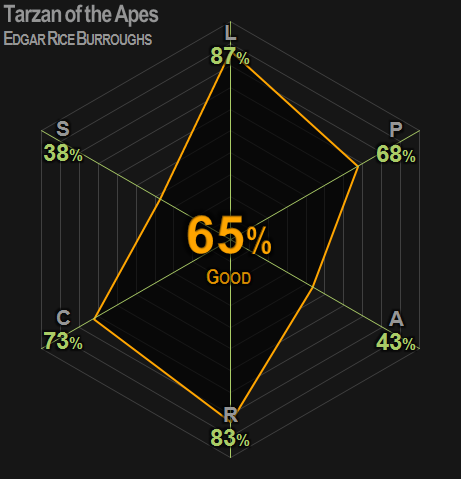 Reading the first volume of Proust’s mammoth In Search of Lost Time is akin to undergoing an initiation ceremony: the air is rife with rumours of what is to come;…

Of course, everyone knows Salinger for Catcher in the Rye, a book I read before this blog began and so never reviewed. That book seemed to be about something. This…

A book filled with melancholy not only for the characters but the world in which they live, The Radetzky March is a carefully constructed memorial to a lost age. Roth…