Another Atwood down. She’s quickly becoming an okay author. But on the whole, I’m not wowed by her writing. Handmaid’s Tale was, of course, excellent. This is good, but not as good as that is.

Grace Marks was a real person. She was really convicted for murder back in 19th century Canada and there has always been controversy about her trial and imprisonment. Having read a bit of Atwood, I can easily see what appealed to her about Grace’s story. The appeal of a woman falsely imprisoned by a male-dominated legislature must have been almost impossible to resist.

But although there are touches of the feminist angle, which is to be expected, I was relieved that there wasn’t as much of this as there could have been. In fact, throughout, Atwood brings her considerable skills to bear in constructing a character who you feel undecided about from beginning to end. This is the best thing about the novel. The whole point, I guess, is that we are all so quick to judge andng no use facts to our own benefit when doing so.

When Dr Simon Jordan is finally confronted with as much of her story as she can remember, he too fails to arrive at the clarity he is sure must be there if he probes deep enough. It’s what he does with this that left the ending hanging for me. I left the novel a bit frustrated by the lack of closure. That’s kind of unusual for me. In retrospect this is, again, a feature of Atwood’s skill in storytelling. It’s quite possible you are meant to be left hanging in much the same way that history has been regarding Grace.

So, this is an interesting novel that benefits from some excellent character development (Grace and Dr Jordan) and some less captivating (Nancy Montgomery, Dr Jordan’s landlady whose name escapes me now) but is not for those who like all their loose ends neatly tied up when they reach the back cover. 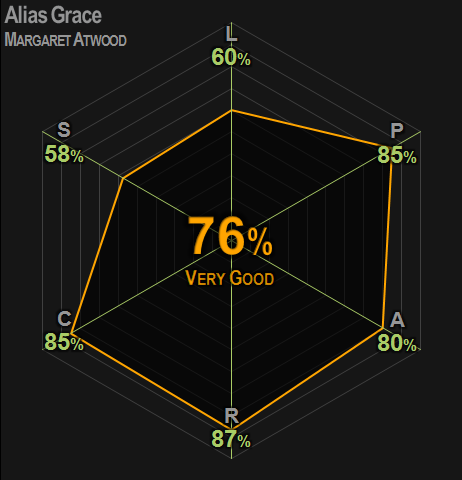 Smilla doesn’t so much come across as an underdog in a portrait of contemporary social injustice as she does a kind of Nordic Lara Croft.

Context: started packing for our final move of these nearly three years (we hope) up to Ukarumpa in the Highlands of Papua New Guinea. REVIEW Paton’s Cry, the…

Context: While I was reading this, a friend who was going away lent me her little runaround. Didn’t run around on it much though. REVIEW Lived in Japan for years…