Now here’s a different kind of novel. Kind of. Mantel has refined her style to provide us with an intimate realist portrait of not Oliver Cromwell (as I mistakenly thought when I began the book) but the lesser known Thomas Cromwell. It’s a rewarding read of an intriguing and defining period of British history and one which I’ve not seen from this perspective before.

Once I’d got my chronology sorted out, I recognised Thomas Cromwell from the superb Oscar winning film A Man for All Seasons. In that, he’s an evil beast who pursues the illegitimate conviction of Thomas More, a staunch Catholic who refused to sanction the marriage of Henry VIII to Anne Boleyn. What the film doesn’t bring out though, is what a beast More was in his turn. The book details the miseries that More’s enemies, the dissenters, went through at his hand. Few survived. This is one of many examples of the great characterisation of even minor characters in Mantel’s novel.

But Mantel’s portrayal of Cromwell is, from the very first line, one that places you on the side of one of the most Machiavellian of Britain’s politicians. You can’t help but like him and admire his political cunning although, towards the end of this 600+ page novel, you’re starting to find him a little too smug for himself. I found this the mark of excellent writing. If I just look at the facts, this would be a man I’d detest.

But by bringing me into his life so intimately, there’s much I appreciate about him. His humble and miserable childhood stands in stark contrast to the heights he attained at the peak of his career, for instance. I especially found the depiction of his wife quite moving. No spoilers here, but it’s not just the events surrounding his wife but the particular way that Mantel paints this for us. This takes great skill.

What I also appreciated was the great insight she gives us into the life of King Henry at this crucial stage in his pursuit of a male heir and what turned out to be perhaps one of the greatest ironies of history. Because the novel does not focus on Henry, it is more unique than the many that do. You see Henry very much from Thomas’ viewpoint and that in itself is worth the read. Because we know the ending of this particular episode, it gives special weight to minor characters that appear, such as the little regarded Jane Seymour.

I believe the book is the first of a two part rendering of his life. If so, it makes sense stylistically as this one seems to end for no apparent reason than it was just getting too long to hold comfortably on your morning commute. I’m looking forward to reading the follow up and descending with Thomas on the downward path to his demise. 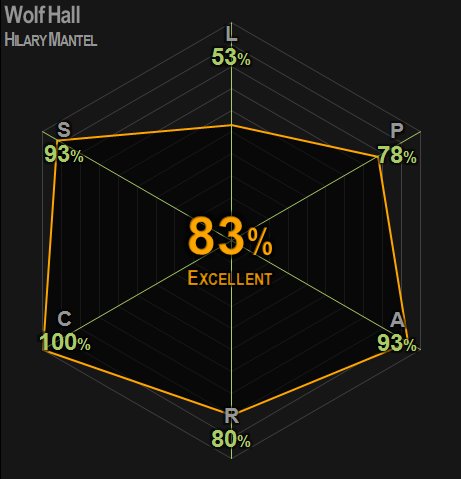