If you want to know what life’s really like, I’m noticing that the later French authors seem to hit the nail firmly on the head. Zola is quickly becoming one of my favourite story-tellers not least because he describes what it’s like to be human in an age where many other English writers were still suffering from our nation’s bout with Austenitis.

L’Assommoir is as dark and grey as its subject matter, the life of the poor in Paris. If you’re after couples that live happily ever after or eleventh-hour plot contrivances that dry your tears and make everything turn out all right, this is not your novel.

If, on the other hand, you want to see life as it really was for so many in 19th century France (post-Revolutionary France too), then you are firmly in the right place. Let Zola introduce you to Gervaise and Lantier, the husband who will ultimately form part of her downfall. Let him take you through the vividly described streets of the Quartier where she tries to make ends meet. And although Gervaise seems to surface at times and get a glimpse of the world she’s striving to reach, the undertow is relentless.

And flowing through the prose is the ever-present liquor. The phrase l’assommoir is pretty much untranslatable. In the story, it’s a bar where brandy flows from a makeshift distillery. The distillery seems to have a life of its own, a life bent on bringing death to those around it.

Sure, there isn’t a character you’d want to hang out with. Even Gervaise herself seems to make decisions that have you banging the table and shouting No! Despite not really warming to her, you can’t help but sympathise as her life goes from bad to worse to worser to worsest.

Not only is Zola a master of characterisation and able to tell a story that has you wondering what on earth is going to happen next, there are set pieces which are classics in themselves. Those that stood out to me are the fight in the wash-house, the dismal wedding party and the poignant but ultimately pointless feast Gervaise cooks up. This novel would definitely taste better at a second sitting and, apparently, is best served in its native French. And all this in a mere couple of hundred pages. Brilliant. 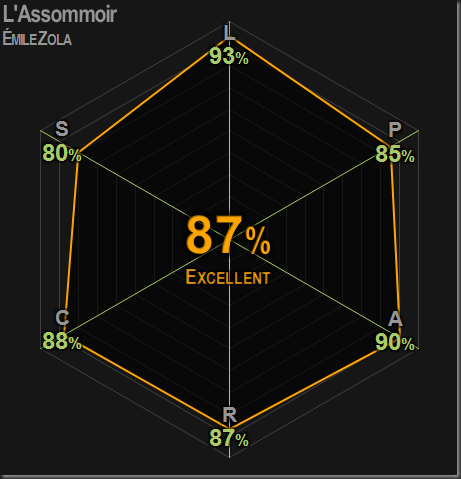 REVIEW Friend lent me this as we both wanted to get it done before (if?!) the film is released in Korea. Quick read and well worth it I think despite…

Context: While listening to this in the Wycliffe kitchens, I was informed that, due to Health & Safety regulations, I was no longer allowed to listen to audio books while…

Context: Listened to this as we encountered a landslide on the road to Mt Wilhelm, PNG’s highest peak (4507m)which the wife successfully climbed while I succumbed to altitude sickness at…

Nearly done and the penultimate volume of Powell’s panoply was quite a good read. Considering the parallels with Proust, it was inevitable that at some point, we end up in…