I started off listening to this. It took hours to get to the end. But what, in fact, the end turned out to be was simply the end of Volume 1, I had another book to go. I managed to find an ebook version of Volume 2 after a bit of a search. Although I’m glad I read it, boy does Smollet go on… and on… and on.

Peregrine is a young lad who’s virtually abandoned by his birth family and thrust upon the duties of Hawser Trunnion. Thankfully, Pickle is more than wealthy. In fact, he’s so wealthy, he doesn’t realise how wealthy he really is and, after a louche life at Oxford, sets off on a tour of France and Belgium with which most of Vol 1 is concerned. His “adventures” are just mostly him sowing wild oats. Vol 2 charts the inevitable slide into penury and the predictable restoration of his fortunes on more than one front.

So, the strength of this book does not, in any way, lie in the story. For me, the book was a good read because of it’s wonderful satire of 18th century upper class gentry and Smollet’s ability to turn a phrase. He has a very wry style of writing that is subtle humour at its best. On top of that, there are one or two great characters. Pipes and Trunnion, for me, made the book. The way that Smollet crafts their dialogue, almost entirely consisting of nautical references, is fantastic.

But, as with the Musketeers recently, it was the legacy of the book that took it from okay to good. Smollet simply doesn’t know a) when to shut up and b) when not to include a 200 page side narrative. I kid you not about the latter. I thought I was never going to get to the end of the story a lady tells him. What made it even worse was that this lady, and her interminable story, play absolutely no significant role in the story whatsoever. If the book was half as long, it would be far easier to read.

Smollet’s panache for dark humour kept me going although I was glad when it was all over. I’m not sure how much I’m looking forward to seeing how this compares to Smollet’s other characters, Roderick Random and Humphry Clinker. 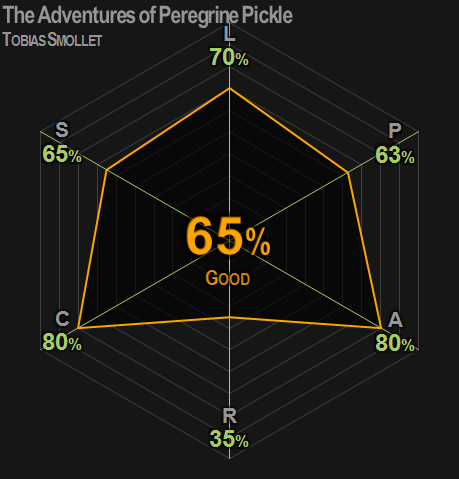 Context: Started to learn to play the piano at some point in the months I spent reading this. REVIEW Many of you know that I’m pretty fixated with the 1001…

Context: Started and finished this in the garden as I’ve taken to 30 mins a day pottering around there ridding my body of office toxins. REVIEW The first audio book…

This one was a bit tedious to be honest. Samar, a young Indian man falls in with a bunch of foreigners in Banares who are exploring the esoteric orient. They…

Context: Read this while we screened the Jesus Film on a generator at the Foursquare Church in Male, PNG. REVIEW It seems entirely appropriate that I should finish this book…

Well, WW2 is well and truly raging now and a number of fairly well-known characters start to become its victims as Nick Jenkins continues to become further involved in the…