Not read any of Byatt’s work before although I have read on of her sister’s (Margaret Drabble). This was a very ambitious novel, as you can tell from the number of tags I assigned to it below. It covers a vast range of topics and has a wide array of characters. At times, in the first half of the novel, I had a hard time figuring out who was who. But as the novel progresses, your life becomes intertwined with the characters and they come to life.

I’ve not read a novel that is full of so much art. Literature, pottery, jewellery making, puppetry, painting, drawing – this book is crammed full of references to art and, as it’s set in late Victorian and Edwardian England, it’s a very interesting time for art too. Byatt does a great job of depicting the history of the time and weaves in several real characters seamlessly into the work: Oscar Wilde, Lewis Carroll, Queen Victoria, Kenneth Grahame all appear from time to time.

Occasionally, she crafts a children’s story for us and there’s one chapter of poetry. I didn’t think these lent anything at all to the narrative and, if there was some symbolism there which I was meant to grasp, it required more effort of me than I could be bothered with. And there are so many themes it can be hard to keep up with them all. Women’s suffrage and sex seem to feature quite prominently as does the political scene at the time. But you’d be quite hard pushed to describe what this novel’s about succinctly.

The characters, once you’ve figured them out, are entirely believable. You get to know them as they grow; as their own characters form in their lives, so they do in the novel. It is a book about children, which makes me wonder if the novel’s titular apostrophe is misplaced actually. But you may find it difficult to separate not only one child from another but entire families. I didn’t really feel I knew any of them until Tom went to boarding school about halfway through.

And I’m now sitting here thinking that if Byatt can create such a vivid world, why didn’t I rate it better than “Good?” I think it’s because, throughout, I felt that there was something missing which I couldn’t quite put my finger on.  Now that I’ve had some time to reflect, I honestly think it’s because the novel simply isn’t long enough. I don’t think I’ve ever said that about a book. As it is, it’s over 600 closely-typed pages. But I just got the feeling that inside this one is an epic story of an era waiting to get out and that, were it, say, double the length, it would be an astonishing masterpiece.

So, while I was dazzled by Byatt’s delicacy, at times I felt claustrophobic and stressed trying to keep up with what was happening to everyone. With a bit more room to breathe, I think this would be a stunning novel. As it is, I think it’s a “good” one. 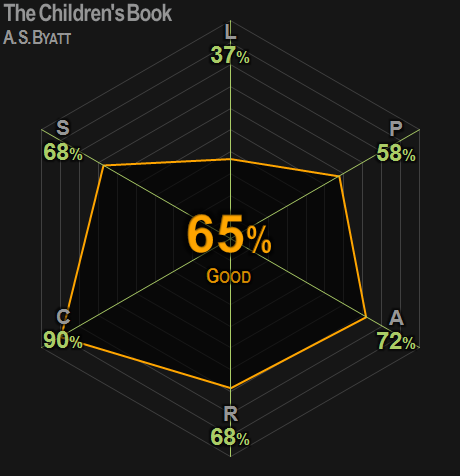 This novel is probably the most evocative I think I’ve read out of North America. Hauntingly beautiful, tragic and yet reassuring too, the Texan and Mexican landscape lives and breathes…

This millennial look at the history of Britain and France is told with wry, sometimes childishly irritating, and rarely laugh-inducing humour. It’s pretty comprehensive, coming in at just under 650…

REVIEW: I actually listened to the public domain audio version of this available at www.librivox.com Dark is the right word for this book. On every level I found it depressing…

What a very, very clever book. To appreciate it, you have to be aware of the context in which it was written and for that I’d heartily recommend the excellent…

Context: Got some nice chairs to relax on for the veranda while reading this. REVIEW Not read any Hammett before but as soon as I hit the first line, I…