The final book in Lewis’ so-called space trilogy was a disappointment to me. At least in the other two, Lewis had created worlds I could explore, here, with the setting being small town England, there was little to hold my attention.

Mark Studdock is a proud, arrogant and self-absorbed man who gets his fix from the praise of his elders. Thus, when the young university lecturer falls under the influence of scientists from the National Institute of Co-ordinated Experiments (N.I.C.E.) he is easily drawn into their circle and into a nightmare for which he might well pay with his life. Jane, his wife, by contrast falls under the influence of those who realise that she is in fact a seer and has the ability to help them stay a step ahead of the N.I.C.E. as they become the medium for forces of evil set on destroying, if not the world, at least a sleepy university town a quick hop by train from London.

This book is longer than the first two put together and it very definitely felt like it. In the first two books you are in alien worlds on Mars and Venus respectively. Thus, when things happen which leave you baffled, you kind of accept it as part of the worlds Lewis has created. But far more baffling stuff happens in this, particularly towards the end, and it had me wondering if Lewis’ housekeeper had slipped something in his afternoon tea.

It’s a simple tale of good versus evil with the earth being the stage for the final showdown between the apparent forces of Satan and God. But placing such a colossal conflict in such a humdrum place and confining it there didn’t work for me. Surely someone else might notice that the world is being taken over. But no, despite what appears to be the Nazi party taking over the entire town, no one outside the place bats an eyelid despite the steady stream of refugees fleeing elsewhere.

But that’s a fairly minor point compared to the protracted and bland plot development that seems to be leading somewhere but actually just leads to more confusion. A massacre by a menagerie, drooling heads, a tramp who only understands an ancient Celtic dialect. I have no idea whatsoever what these were about or why they were necessary to the plot. If by them Lewis was implying some symbolism a la Narnia, it was lost on me. Completely lost.

So, I feel a bit insecure labelling a Lewis mediocre, but that’s what my rating chart considered my opinion to be. So be it. Lewis wrote much, much better fiction. If you’ve read everything else he’s written and you want to get a full house, read this. As for the entire trilogy, I’d say, read the first two and leave it there.

Obviously, it was high time she went in. 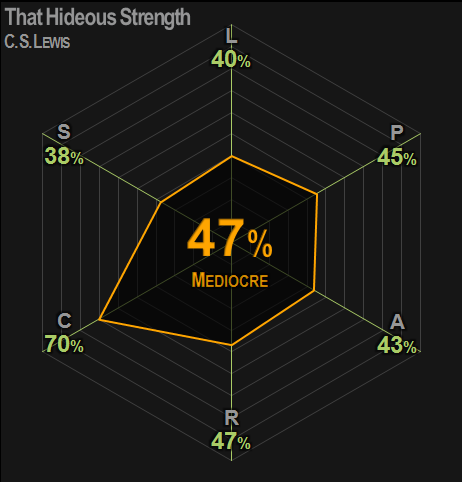