Urghh… took me an age to read this. It was partly my fault and partly the book’s. Long ago, I realised during the first book of this five book tome that I wasn’t going to enjoy lengthy sections of this. I’ll explain why in a bit. But rather than bite the bullet and get it over with, I decided, somewhat subconsciously influenced by Rabelais himself, to not leave the toilet until I had read at least a chapter. Granted the chapters are tiny. But there are 299 of them. Sigh…

So, a combination of bowel movements and Rabelaisian prose meant that, a year later, I was still plodding through this and wishing that either I was dead or Rabelais had never lived. Time travel precluded the latter and so I had to content myself with the former. And it didn’t help that I felt the victim of some huge literary practical joke upon reading quotes like this:

If you say to me: ‘It does not seem very wise of you to have written down all this gay and empty balderdash for us,’ I would reply that you do not show yourselves much wiser by taking pleasure in the reading of it.

Well I didn’t take pleasure in the reading of it. So there!

The story, if there is one in this the world’s most rambling satire (please God let it be so), is that Gargantua and his son Pantagruel are a couple of characters who travel widely and meet as many different characters as there are chapters. Each of the episodes they end up relating are side-splittingly funny… if you’re a 16th century French polyglot playing fast and loose with the rules of monastic living. I’m not. Nuffsed.

Rabelais subjects everything to scathing satire: history, literature, politics, religion, philosophy, culture, medicine. The Roman Catholics get a particular spanking. And there’s an entire book (oh, that I spoke in jest) on whether or not a particular character should get married. Each chapter is an argument either way until, at the very end of that particular book 52 chapters later, they decide to leave the matter undecided. Aaaargh!

Yes, yes, satire is meant to be like this: a literary insider’s joke. But, and I’ve made this complaint before, that’s as feeble an excuse as a postmodernist painter telling you that his entirely black canvas is “Whatever you want it to mean.” Life’s too short. This is going on my list of 1001 Books You Don’t Have to Read but Should Know About. 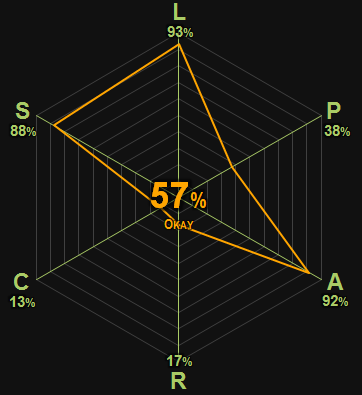 This is a novel that has, since it’s publication in 1759, divided opinion throughout the ages. It certainly divided mine as you can tell from the review radar below. While…

When you read, you bring something of yourself to the book so that you can interpret what you’re being told according to your previous reading, your life experience and your…