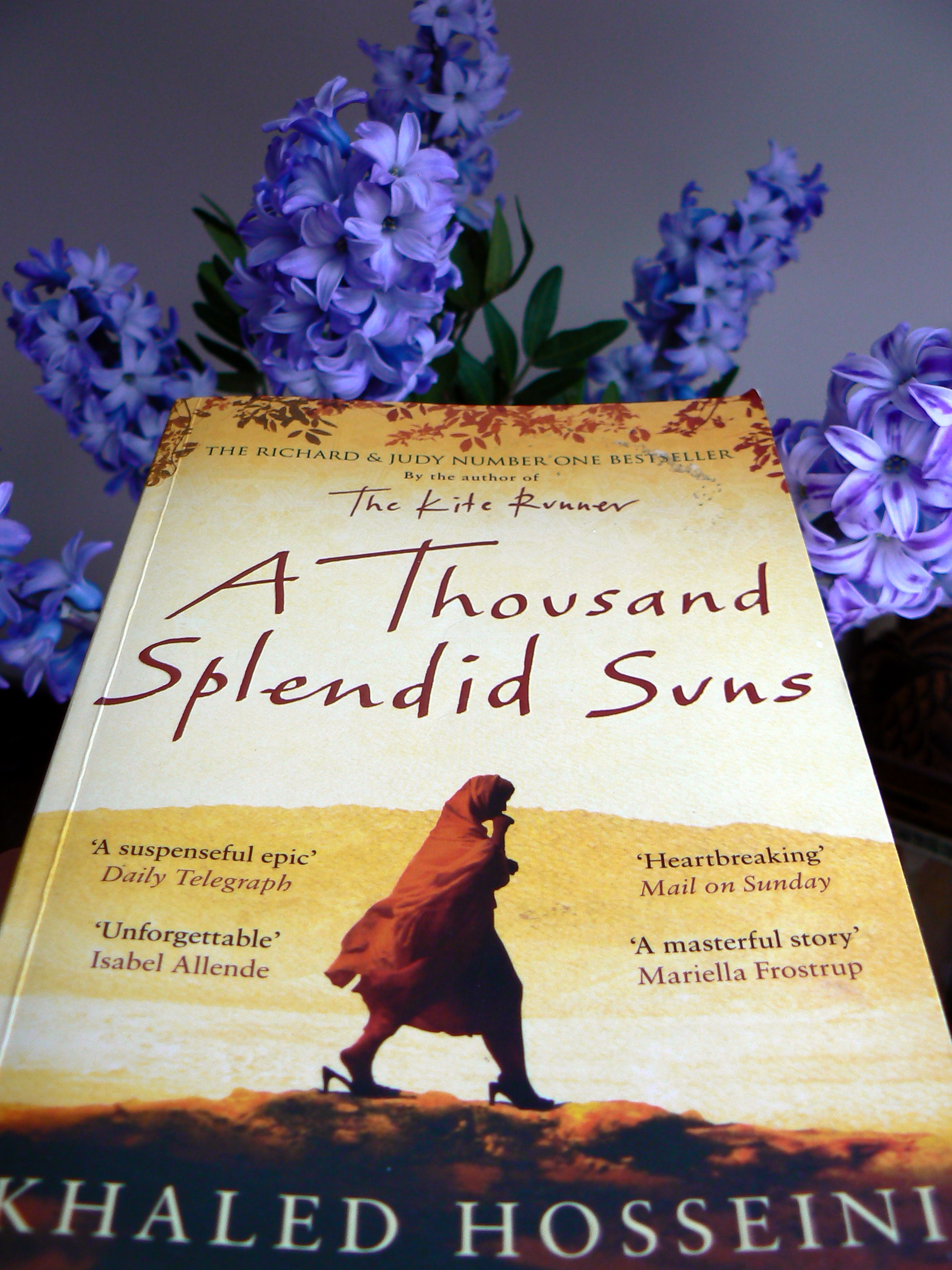 Context: The wife bought some lovely flowers and the room filled with their scent as I read this.

REVIEW
“It’s better than the Kite Runner,” said a friend. Even the Washington Post sells it as such. That was good enough for me. I thought the Kite Runner was a flawed attempt at a first novel which, despite starting very promisingly, descending into the outer reaches of plausibility as it went on. I’m glad to say that Hosseini’s second novel does not do that although there are times at which I’m sure the average reader will wish it wasn’t so true to life.

This is the story of two women: the much older Miriam has nothing and then loses even that. The much younger and more attractive Leila has little more. Both women’s destinies are dependent on each other in this tear-jerker of a novel about the realities of life as an Afghani woman in the period from the 1950s until the modern day.

If you’re interested in women’s rights, justice, compassion, peace, tolerance and understanding, this novel will make you very very angry. Pretty much from the get-go, this is about life as an outcast, as a second rate citizen, as a nobody. And the tension lies in how far each of these women is forced to go to maintain any shred of decency. There are twists and turns, one particularly unexpected twist, if you aren’t the kind of person who’s always suspicious of novels leading you one way only to turn you another, and the novel ends on a high note of hope. After such a traumatic tale, most readers will feel that it’s the least he could do.

Their stories unfold against the backdrop of Afghani conflict in detail from the 1973 bloodless coup which brought in the Republic, through the reign of the Taliban and beyond. This makes for very interesting reading when it pokes its head into the narrative in any more subtle way than through incoming rocket fire. But, for the most part, there’s scant real description of the political twists and turns. Instead, we see conflict and, sometimes, it’s unclear who’s fighting who. Personally, I would have preferred more of it. But I can see what Hosseini is perhaps trying to do here. The women in the story would have had little or no idea about the big picture and so it makes sense to keep the readers in the dark.

But with the story very narrowly centres on the two women and their immediate families and no major exploration of the fascinating and destructive waves of political change, there’s a lack of depth to both the characters and the background, I felt. This is especially noticeable if you’ve read some other great novels placed against political turmoil: A Fine Balance with Mistry’s backdrop of the years of Indira Ghandi or even Gone With the Wind where Mitchell’s 10 long years of research into the US civil war bring that conflict vividly to life through the characters.

It’s quite clear to me that although this is a moving novel and one which does capture the imagination, I wonder if Hosseini has the skill to turn out something that requires more than simply knowing a bit about the history and culture of Afghanistan and the technique of introducing tension into a novel for good storytelling. Through two novels now, he’s painted two good stories with very broad strokes. For me, despite this being better than the Kite Runner, it still lacks the detail to make it a great book. With Suns though, Hosseini has, however, quite deservedly earned his place on the airport shelves.

CLOSING LINE
Because, if it’s a girl, Laila has already named her. I usually breathe a sigh of relief when I finish a “classic” like Wildfell Hall. I certainly did after Persuasion which I shall review shortly. But Anne’s classic has a…

Context: Got my first cold in a year and a half just as I finished this off. I should have been reading The Spy Who Came in from the Cold!…

Kotwinkle is probably more famous for writing E.T., not this, and it’s hard to see why this needs to be read by anyone before they die. This is a shame…

The 1001 books list does it again and throws something superb my way. This one just crept into Arukiyomi’s Hall of Fame, a brooding saga of a novel with symbolism…