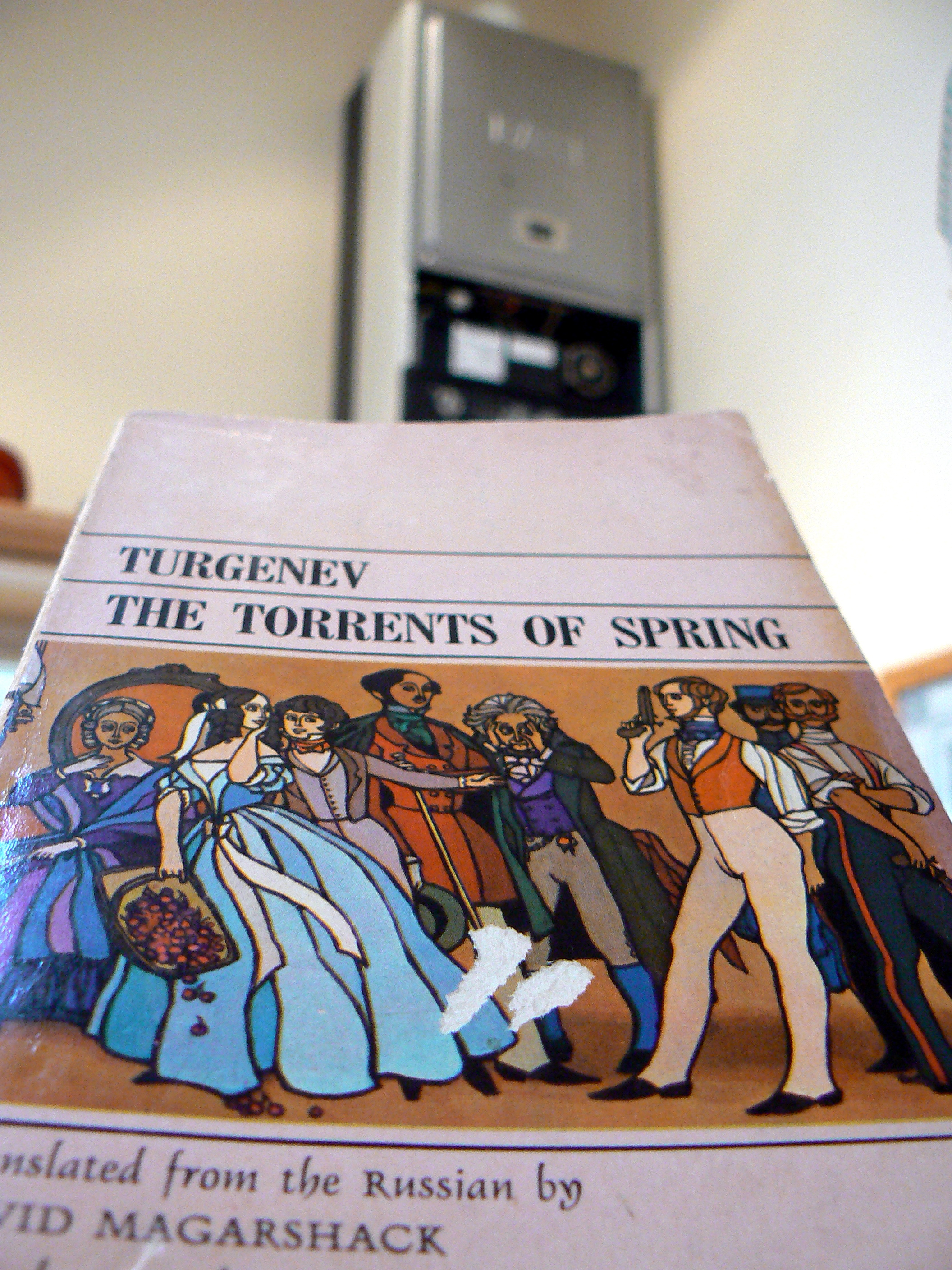 Context: I read this in near-freezing conditions as our boiler broke down and a useless and very expensive plumber took 10 days to fix it.

REVIEW
Oh, I’ve got an hour or so before I really need to turn the light off,” I said as I finished up Hosseini’s Splendid Suns, I’ll just make a start on this next little Turgenev I’ve got. Compared to Fathers and Sons, this was like floating on air compared to being set in concrete. I finished it in one go.

Some might say, and they often do, that this is a love story. Sure, Dimitry is smitten, and when I say smitten, I mean smitten. His focus of his affections is a girl of Italian descent living in Frankfurt where he’s staying. Within a relatively short space of time things take their course as you’d expect, and there’s the obligatory duel thrown in for good, 19th century measure.

But a short way from the end, there’s a bit of a twist and it’s here that, for me, I wondered if it was a love story at all but rather one of infatuation. I won’t spoil it for you but it made me wonder whether Turgenev was questioning the very nature of love.

I liked the novel. I felt it displayed well the fragility of the romantic notions that literature commonly expresses as love. As such, it’s a slap in the face to people like Austen whose characters display about as much depth in their expression and understanding of love as a four year old. I liked the fact that it built up and up and up as all love stories do and then took this unexpected twist which gave Dimitry as a character a sinister side that makes you realise that you have to question everything in life, even something as ‘simple’ as romance.

And, for a Russian novel, it’s remarkably free of any long pedantic ramblings about politics, life or serfs. I enjoyed it.

FIRST LINE
It all happened in the summer of 1840.

Who does not know what a German dinner is like? Watery soup with lumpy dumplings and bits of cinammon, stewed beef, dry as cork with adhering white fat, clammy potatoes, soft beetroot and grated horseradish, a bluish eel with capers and vinegar, roast meat with chutney, and the inevitable cooked Mehlspeise, a kidn of pudding with a sourish red sauce; the wine and beer, on the other hand, are excellent.

When you think of it, there is nothing in the world stronger and – weaker than a word!

First love is like a revolution: the monotonously regular routine of life is smashed and destroyed in one instant, youth takes up its stand on the barricade, its bright banner flutters high – and whatever awaits it in the future – death or new life – it sends its ecstatic greeting to everything.

Weak people never put an end to anything themselves: they always expect things to come to an end.

CLOSING LINE
It is rumoured that he is selling his estates and is about to leave for America. To a certain extent autobiographical, this again, as with The Driver’s Seat, is about someone making their own decisions. This resonated with me as Professor Rene Harding resigns from his…

A far cry in length from War & Peace but nonetheless this little novella packs quite the punch. On a train journey, passengers begin to gossip about a story they’ve…

Really didn’t get into this. It’s not helped by the unorthodox dialogue which I had a hard time following at times. There are some half-memorable characters in here but the…

REVIEW: I actually listened to the public domain audio version of this available at www.librivox.com Dark is the right word for this book. On every level I found it depressing…

Context: We got and started opening a chocolate advent calendar while I was finishing this off. REVIEW This is one of the strangest books I’ve read in a long time….