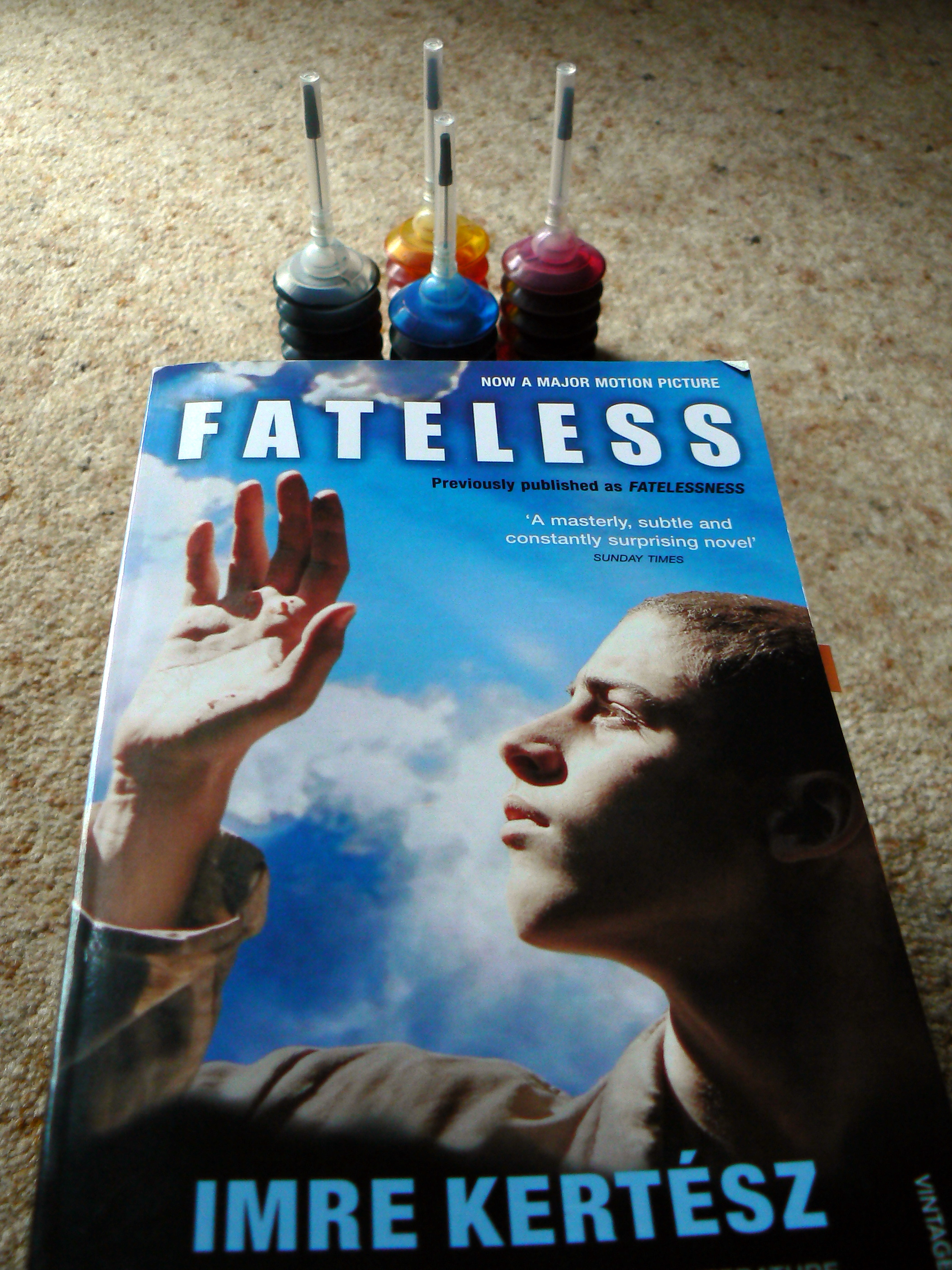 Context: As I was reading this, our Dell printer ran out of ink and I got some ink to refill them manually. Never done that before. Dead easy.

REVIEW
This is one of the most unusual books dealing with the holocaust that you are likely to read. By the end of it, even the characters themselves are frustrated with the views of Gyuri, the protagonist. Just as likely you will be too… at least a bit. I was. A bit. But I was also full of admiration.

The novel takes place in the mind of a 14 year old Hungarian Jew as his life becomes part of the Final Solution. The whole book is written in such a dreamlike passive state and this works, it really feels like you are seeing the world the way Gyuri sees it. And that’s important because that is the point of this novel: the individual point of view of the insider.

Gyuri is no fool. But at times, you wonder if he’s a little simple. He isn’t. He’s just more reflective than you give him credit for. He doesn’t react, that isn’t part of his approach to what he experiences. Instead, he processes it and tries to understand the forces that provide the energy for it all, forces which neither he nor anyone involved in the Holocaust can control or reason with.

While this is controversial and proves so for Gyuri as he returns to post-war Budapest, it also allows him to objectify all that he experiences and this enables him to retain a dignity when all around him are losing theirs. I liked this. I thought that this must be one of the most succesful ways that you could emerge from the camps. While his relatives urge him to forget his past so that he can forge his future, Gyuri tells them that to do so would be to forget himself. How can he divorce himself from his own past, he argues. They don’t get it. Unfortunately, the film differs from the book here which is strange seeing as Kertész wrote both.

At no time is Gyuri broken pschologically. Emotionally I’m not sure he’s all there anyway. He seems a bit devoid of this. Physically yes, he almost dies: “I could only wonder at the speed, the rampant pace, with which, day by day, the enveloping material, the elasticity, the flesh around my bones dwindled, atrophied, dissolved, and vanished somewhere.” But mentally he’s always the same old Gyuri: “I had precise cognizance of everything about [my body], it was just that I myself somehow no longer inhabited it.” Even his physical suffering improves his mental state. Take the episode where he discovers unders the bandage that a wound on his hip is being eaten by maggots: “I just watched the gluttony, the teeming, the voracity, the appetite, the unconcealed happiness; in a manner of speaking, it was as though it were vaguely familiar to me from somewhere.” This is subtlety at its greatest.

Intending to kill him after he’s collapsed doing forced labour, a guard says he’ll show him that he can work harder still and makes him carry bags of cement so heavy that black spots appear in front of his eyes. But, by simply focussing on each next little movement, Gyuri manages it. Without rancour or malice, he concludes that he has to admit that the guard was absolutely right: he could work harder than he had been. It’s this belief that all he has to do is simply follow what fate lays at his feet that leads to his survival. All around him, people are talking about God, about guilt, about injustice and Gyuri just quietly accepts that the real power behind it all is simply fate.

And this is the strength of the novel. It provides a perspective that is utterly missing from much of the Holocaust literature we have. Take Maus for example, or Schindler’s Ark, or even the Boy in the Striped Pajamas. They’re all coming at it as an event that was devoid of any redeeming qualities, where everything was destroyed and nothing forged, where people were broken, not made, an event to be avoided and fled from at all costs. Imagine their fury as Gyuri concludes one chapter by saying “I would like to live a little bit longer in this beautiful concentration camp.” It’s quite remarkable that this is written by a survivor of Auschwitz himself.

CLOSING LINE
And provided I myself don’t forget [the happiness of the concentration camps.] Context: started this on a walk in the country in Portugal with my family. REVIEW Never heard of this and would never have done if it wasn’t for the 1001…

I was looking for something that would simply take me through the Gospels of the New Testament, something without a fancy cover and a website full of Flash videos and…

Context: read while I was suffering from the worst cold I’ve had in years. REVIEW It begins with the discovery, by young Michele, of something horrific which is all his…

With the expiration in the EU of its copyright, this initially suppressed novel is now, somewhat ironically, in the public domain in Europe. Almost 88 years to the day after it…