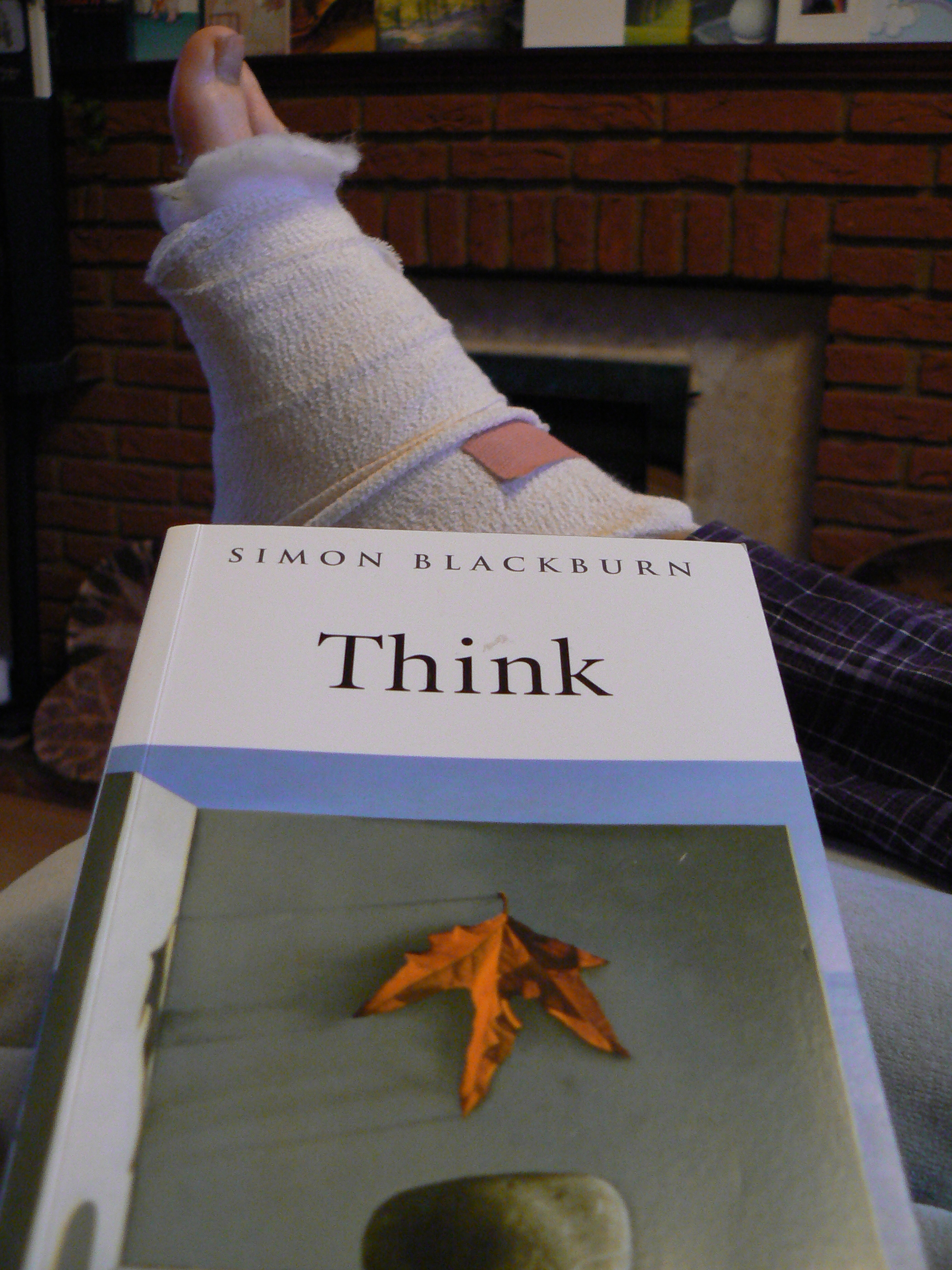 Context: while I was reading this, the guy who owns the house we’re living in broke his ankle.

REVIEW
My wife’s aunt gave me this one for Christmas…. (ahem) Christmas 2008. Thought it was about time I got round to it. I was definitely intersested to read it as I’ve always wanted to know more about philosophy. If you do, Simon Blackburn, Prof of Philosophy at Cambridge University is your man. Thing is, having read the book, I’m not sure I do still want to know more…

The book starts out aiming to appeal to the pleb in the street. That’s me, I thought. But a chapter or two in and I was lost among lengthy quotes from Hume and Descartes and generally feeling a bit fed up with it all. I tried really really hard to follow the arguments. Like when you open up a new manual or a language textbook and say, I’m going to really make sure I understand each bit before moving on to the next bit. Ah, good intentions…

I got so bogged down in it eventually that I started thinking well what’s the point. Who cares. I’ve got more important things to think about like what I cook for dinner or whether to accept the mother in law’s invitation to go round tomorrow night. And, frankly, there’s very little in this book that can really help me make those decisions unless I devote myself to learning the systems of thought he explains.

Blackburn tries really really hard. The book is well produced and well organised. It’s the kind of book you see on the shelf and just want to pick up and read. But I found it pretty hard going. It was only when he got the chapter about God that I perked up a bit. Trouble is, Blackburn, like so very many others really has no notion of what being a Christian is really about in essence. It’s our fault really, us Christians are a bit too much fluff and no substance sometimes, all ritual and no reality too often.

For example, he questions the reality of miracles on the basis that they do not demonstrate that God is in charge of the world. If they did, he argues, why are they not more useful? Why water into wine and not the destruction of HIV? Why raising Lazarus instead of killing Hitler? Valid questions, but the premise is wrong (see! I did learn something). The premise is that water into wine is worth less than destroying HIV. Unless you understand the significance of the miracle at Cana, then it’s understandable you’ll think it a waste of time.

I think, actually, that Prof Blackburn has a bit of a chip on his shoulder re Christians. Letting his gown slip a bit he says “[God] sends to hell those who don’t believe in him, and of course encourages his believers down here to give them a hard time, as well.” So, the poor prof seems to have suffered from some overzealous brethren. Shame he can’t be a bit more philosophical about that!

And that’s what disturbed me most about the book really, despite how well it was written and the fundamental importance, apparently, of the subject matter, where does it leave people like my wife. She’s a feeling-based person, all intuition and gut feelings, very deep and moved easily by all sorts of things. She has no time for thought, just as I, often, have no time for feelings. The problem for this book is that her way of living is equally valid.

And speaking of validity, right at the end, there’s a quite startling contradiction. On p296 he mentions how societies create different solutions to the problem of living and says that they are simply different: “we do not have to rank them.” Yet on facing page he then says, “we do not have to see them as equally good.” But surely, if we do not see them as equal, if we have decided they are not equal, we’ve already ranked them, no?

[on defending suffering as character-forming] the imperfections of Windows have no doubt led to virtues of patience or fortitude, but even Microsoft have not used that to defend the perfection of the product

CLOSING LINE
The world is full of ideas, and a becoming sense of their power, their difficulty, their frailties, and their fallability cannot be the least of the things it needs. Context: While reading this, I twice took this road north from Male to attend cargo cult meetings in Rereu. REVIEW Hovey’s task is to help Christians a) understand a Melanesian…

If you’ve not read Crime and Punishment, then this is a good place to start. Far, far shorter, it is nevertheless cram packed with the fevered wanderings of a protagonist…

Context: Finished this off while lying on a new memory foam topper that I bought for our bed. Mmmmmemory foooooaaaaaammmmmm! REVIEW Here’s a strange book. I spent most of this…