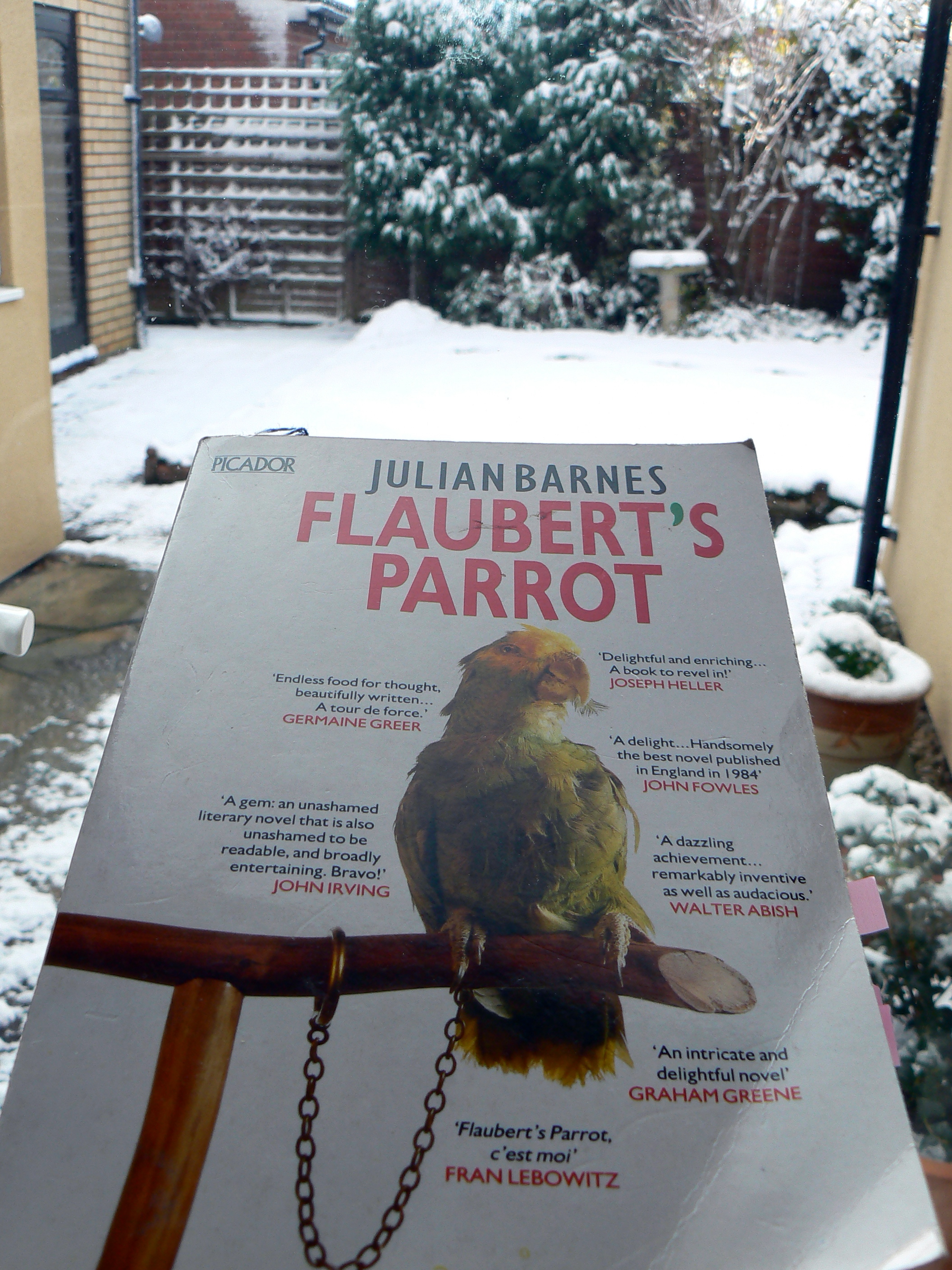 Context: As I was reading this, it started snowing in the UK… and it went on an on for days. First white Christmas we’ve had for years.

REVIEW
This is a very interesting book written halfway between a novel and non-fiction and cram full of reflections on life and writing. I liked the life bits but got a bit bored with the literary end of things. I’m not that familiar with literary history at all, you see; much more familiar with life. Still, I did thoroughly enjoy large parts of this small book and thought the whole very clever, if at times a little too much so.

Geoffrey Braithwaite is fascinated by the life of the French novelist Gustave Flaubert and, in particular, by his greatest creation, Emma Bovary. The book is written from Geoffrey’s point of view but in a non-fiction style as if he’s a literary researcher. To give you an illustration of how convincing this is, I was a few chapters in before I realised that the book was fiction and written by Julian Barnes, not Braithwaite.

Each chapter is a vignette in itself. Barnes writes from a different angle in each one. These vary enormously with accounts of Flaubert’s life, Braithwaites’ life and even Bovary’s life as well as a dictionary, various guides and even an exam paper at the end.

This is all very tongue in cheek mostly but occasionally the book wanders away into the literary wilderness a bit and gets lost. Unless you are really really into literature i.e. you studied it at university or something, you probably won’t appreciate these bits. But the book’s short and those bits don’t make up much of it. Other than that, this was a very interesting read.

Isn’t the most reliable form of pleasure… the pleasure of anticipation? Who needs to burst into fulfilment’s desolate attic?

What an awful thing life is, isn’t it? It’s like soup with lots of hairs floating on the surface. You have to eat it nevertheless.

Language is like a cracked kettle on which we beat out tunes for bears to dance to, while all the time we long to move the stars to pity. – Flaubert in Madame Bovary.

And you do come out of [grieving for the loss of a spouse], that’s true. After a year, after five. But you don’t come out of it like a train coming out of a tunnel, bursting through the downs into sunshine and that swift rattling descent to the Channel; you come out of it as a gull comes out of an oil slick. You are tarred and feathered for life.

[Flaubert writing in 1850:] From time to time, I open a newspaper. Things seem to be proceeding at a dizzying rate. We are dancing not on the edge of a volcano, but on the wooden seat of a latrine. and it seems to me more than a touch rotten. Soon society will go plummetting down and drown in nineteen centuries of shit. There’ll be quite a lot of shouting.

CLOSING LINE
Perhaps it was one of them.

You know you’re in the presence of literary genius when there are large parts of a novel you feel out of your depth in. I felt like I fell into…

Context: Read this while staying at my in-laws where I gave the spare room a much needed seeing-to. REVIEW This book I liked. It’s the story of your average disfunctional…

So, I work in Saudi Arabia. For two years, I lived there too. Recently though, I’ve decided life is better across the 20km bridge separating this nation from Bahrain, where…

Context: Started reading this while I was staying in Kokopo, East New Britain for work. REVIEW If you want to know what life’s really like, I’m noticing that the later…