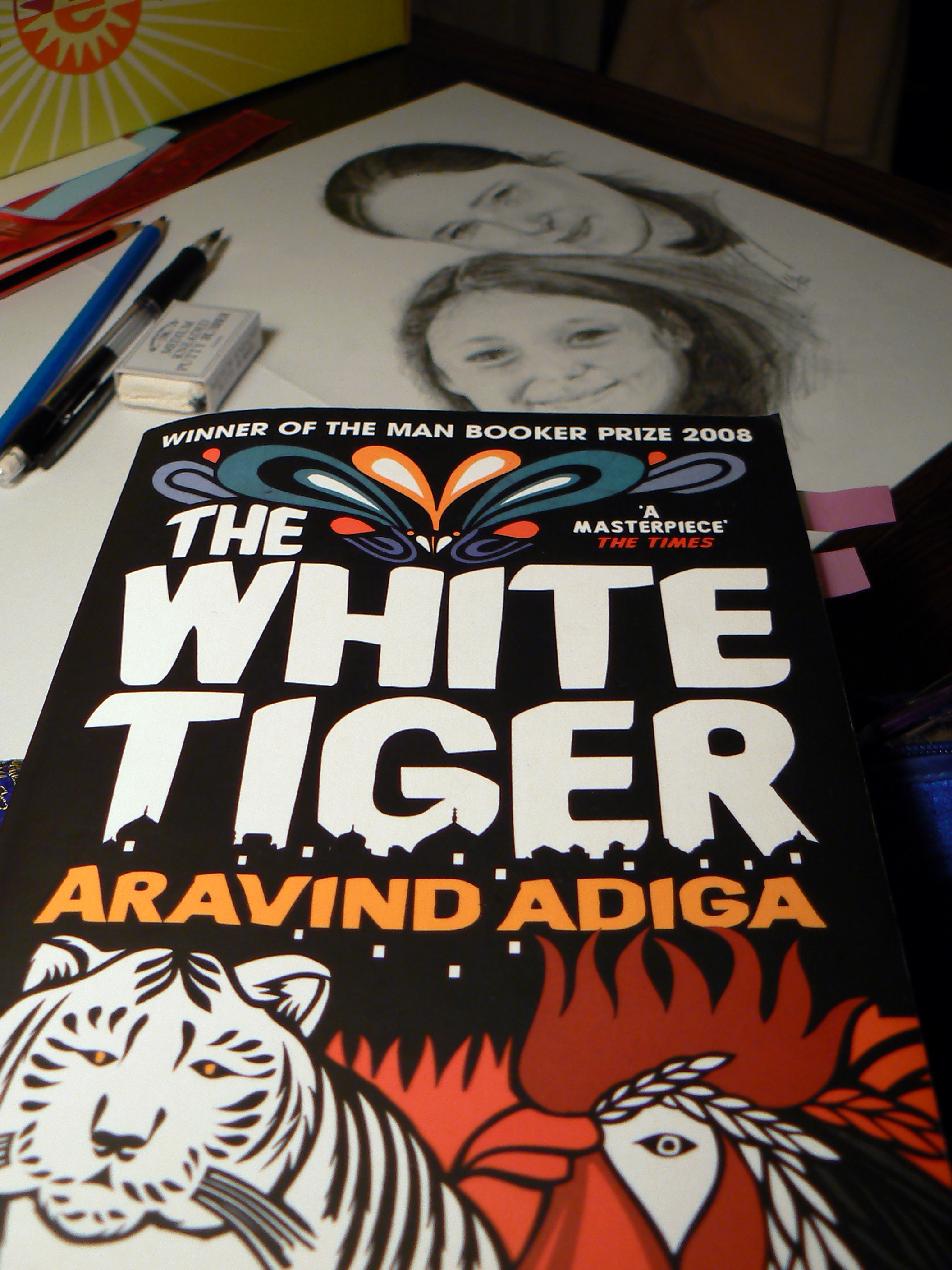 Context: got back to a passtime that I last did nearly 20 years ago while reading this: sketching.

REVIEW
In the form of an email to the premier of China, Balram writes his memoirs from the self-made luxury of Bangalore. His start in life couldn’t have been more removed and how he got from there to where the book opens is a mystery until the very end.

Adiga won the Booker with this in 2008 and, quite frankly, he got lucky; it must have been a particularly weak year. The Times calls this a masterpiece. I can’t see it myself. Sure, it’s a fun read and there’s some great insight in there. But it’s not Midnight’s Children by a very, very long way.

We never find out why Balram is writing to Wen Jiabao. It certainly isn’t integral to the construction of the novel for him to do so. What is integral is a bitter hatred of pretty much the whole setup of Indian society. I don’t think any aspect of it goes untouched as Adiga brutally critiques it through the writing of Balram.

Right from the word go, we enter a world of hard-edged poverty, oppression, corruption and bondage. Even when Balram gets a lucky break, there’s still oppression, corruption and bondage despite the fact that poverty seems to have been dealt with. It’s all relative anyway and after a couple of worrying moments when he might lose it all a tension arises in the character. The dilemma is whether he should join the corruption bandwagon of crime or to keep his conscience clean. I’ll leave you to find out which he chooses.

If I hadn’t had a deep love and experience of India myself, I wouldn’t have enjoyed this novel half as much as I did. I really don’t think this should have won the Booker at all. It just isn’t that good. Usually, Booker winners are profoundly well written and impact you in a more significant way than this did. I can’t think for the life of me how anyone would be impacted at a deep level by this book. If you have, comment and let us know.

FIRST LINE
For the Desk of: His Excellency Wen Jiabao, The Premier’s Office, Beijing, Capital of the Freedom-Loving Nation of China

In 1947 the British left [India], but only a moron would think that we became free then.

The story of a poor man’s life is written on his body, in a sharp pen.

CLOSING LINE
Yours for ever, Ashok Sharma The White Tiger of Bangalore boss@whitetiger-technologydrivers.com

Context: Listened to this in a day or two while working in the Wycliffe kitchen. REVIEW The film is an absolute classic. In fact the book made me want to…

Context: Finished this off as we visited some friends in Cleveland, Ohio. REVIEW This book spirals downwards in a debilitating circle of debauchery as George Duroy aims to satsify his…

Not the best novel I’ve ever read. I can’t really think why this should be on the 1001 list except that it was introduced from the second edition onwards to…

Powell plays around with the sequence of events for the first time in the series in this volume which starts after the second world war has concluded. Very quickly though,…