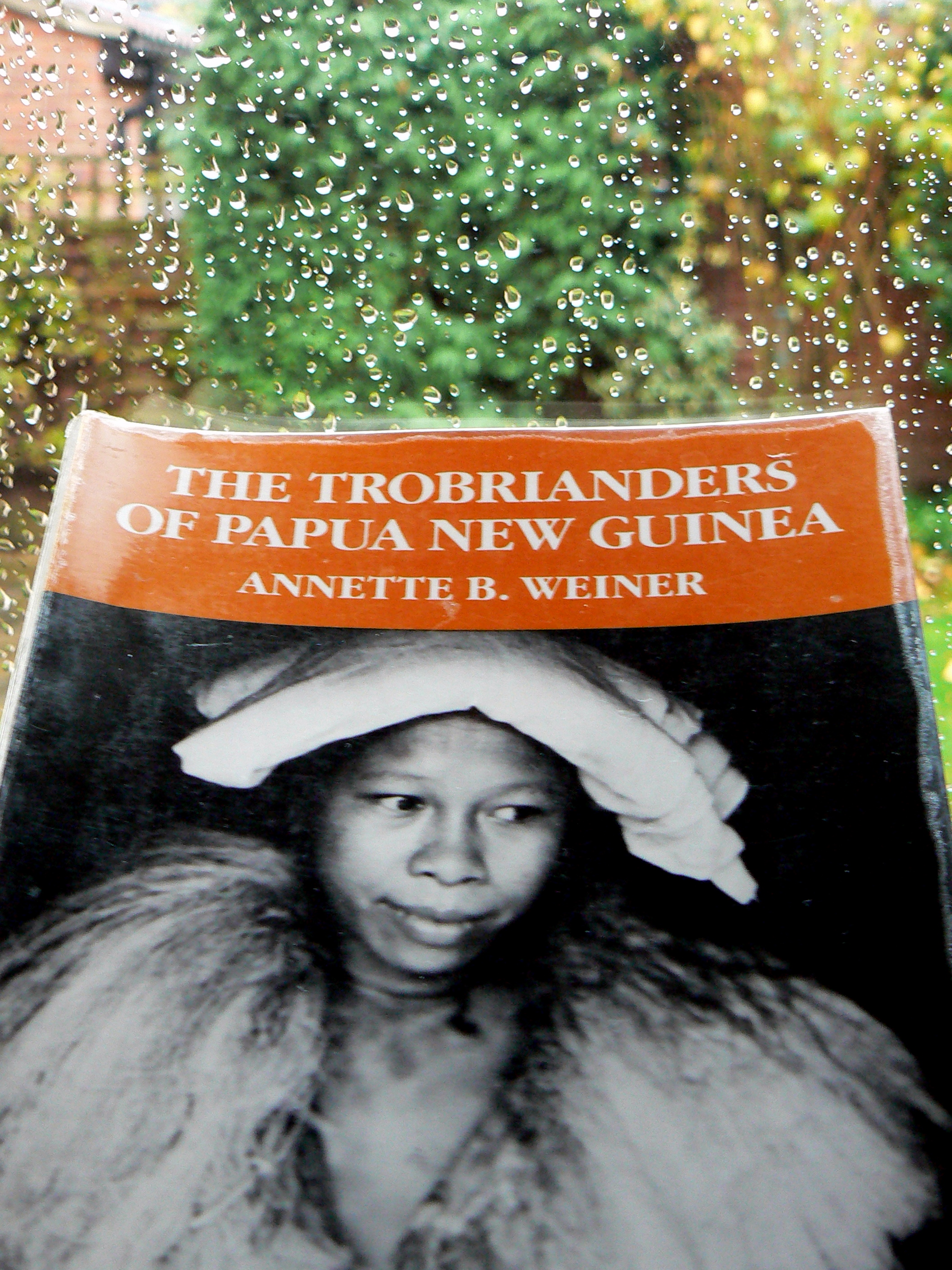 Context: Read this in bed on a rainy, rainy autumn day in Bar Hill.

REVIEW
The Trobriand Islands are a small archipelago just north east of the mainland coast of Papua New Guinea. This is where my wife and I hope to be from next August for a couple of years – PNG that is, not the Trobriands. But if we did have an opportunity to visit them, we’d jump at it and Weiner’s book has wetted our appetite even further.

Her ethnography is vibrant right from the start with descriptions of the unique culture and customs of the few thousand inhabitants. She does well also to ground this historically against the backdrop of the seminal anthropological studies of Malinowski done a number of decades before.

Because of this backdrop, her work can build on his studies and this gives them a rich perspective. However, she’s not rested on his laurels but has taken our understanding of Trobriand culture even deeper than he did. In fact, she sheds new light on some of his findings, even clarifying that they weren’t as accurate as he’d believed.

There are some great cultural insights that she provides us with, and, with all the best ethnographies, you get some very richly entertaining ones. Take this quote about taboo language:

It is deeply shameful for anyone to refer to the couple’s sexual life together. For example, children and young people often tease each other by shouting, “F- your mother” or “F- your father.” But to say, “F- your wife” (or husband) to anyone is among the most dangerous verbal assaults.

And to illustrate just how bad doing this can be she cites an example of a guy who said this and then was forced initially into fleeing from the village for a week away in another village. After this, his house was literally carried away so that he could live elsewhere and escape the inevitable death that remaining in the community would have brought him.

Weiner very much has grasped what the culture of these people is both on an intimate family level, at community level and also on the regional scale with her excellent descriptions of the intricacies of the exchange partnerships that link island to island. But don’t take my word for how much of a good job she has done in getting under the skin of the people. Listen instead to the words of an elderly woman in the community who said, “make her stay in Kwaibwaga.”

“That was the best compliment I ever had,” says Weiner, and I think she was right.

FIRST LINE
Even on a clear day, the flight in a small twin-engine plane from Port Moresby, the capital of Papua New Guinea, to the Trobriand Islands can be turbulent.

CLOSING LINE
With masterful zeal, Trobrianders make manifest who they are through thwhat they exchange, thus making them expert at transforming into their own Trobirand style whatever encumbers or encroaches on their rosulute sense of self.

Britain has The Ragged-Trousered Philanthropists. The US has The Jungle. France has Germinal. It falls somewhere between the two in terms of its readability, but it is far, far ahead in…

Context: Finished this off the day we went into Perth taking our friends’ bikes to cycle around King’s Park and the Swan River. REVIEW Never read any Oscar Wilde but,…

Context: Hosted an event where we projected a film on a sheet we rigged up on the wall of the living room while I read this. REVIEW Another great novel(la)…