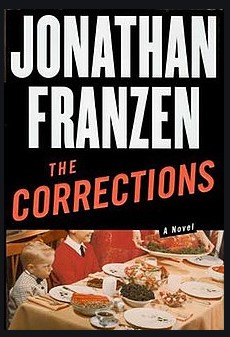 Context: Read this while staying at my in-laws where I gave the spare room a much needed seeing-to.

REVIEW
This book I liked. It’s the story of your average disfunctional American family which could, of course, be your average westernised family pretty much anywhere. As such, I related to it a great deal.
The title is interesting. Franzen’s point is that, having been brought up, we then spend the rest of our adult lives making corrections to alleviate the effect of mistakes our parents have unwittingly or otherwise inflicted on us. I’m not sure I agree with this too much but it was an interesting theory.

It seems to me that what Franzen means by a ‘correction’ is that the child starts to do things, not the way the parent wants them to do them, but the way that the child itself wants to do them. So, one character is pressured into settling down and finding a nice man to marry. This results in a marriage which soon dies in divorce. The correction in this case is that she experiments with lesbianism and, by the end of the book, has become a sort of asexual being who is so confused by her experiences that she has simply checked out of the world of sexuality.

To me this doesn’t seem so much as a correction as becoming further embedded in the mire. And this isn’t just the one character. It seems to happen with all of them. Perhaps Franzen is simply suggesting that we spend a great deal of our time searching for corrections but not actually finding them. I’m not sure. In any case, the characters concerned, rather than improving their lot substantially by the end of the book seem, to me at least, to have simply moved into, not a better, but simply a different set of circumstances they are at a loss to deal with.

Now the ultimate correction is Christ. He came to die, and in so doing, to put to death the old broken, damaged selves that we are. New birth in him is the start of a life that is corrected and, having been a Christian for over 20 years, I can testify that once I was seriously messed up, now I am healed. I no longer have issues with the mistakes that my parents would freely admit they made.

So while the characters in The Corrections look to solve their problems through various methods including sexual exploration, control of others and fraud, and find no lasting solution to the fallout from their upbringing, I and many others can testify to the fact that, in Christ, correction that is lasting and total is guaranteed.

So, it was an interesting read from that point of view and Franzen is a good writer. He keeps your attention, creates characters that you feel for and relate to and, while he can be forgiven at times for episodes of DeLillo-ism, has written a very readable novel. It just grieves me that this is yet another novel that describes the pain of being human without any effective consolation.

FIRST LINE
The madness of an autumn prairie cold front coming through.

CLOSING LINE
She was seventy-five and she was going to make some changes in her life.